It is estimated that in the United Kingdom between 10 and 20 per cent of the population suffer from irritable bowel syndrome, a distressing, frequently embarrassing condition which can often limit ordinary, everyday activities. 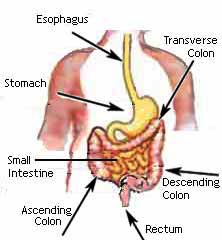 Similar figures have been shown in the United States, Canada, Australia and other Western countries. It is often described as the most common gastrointestinal disorder – but with most of its suffers neither seeking or receiving treatment.

Symptoms include recurring abdominal pain or spasms, chronic diarrhoea or chronic constipation - or a combination of both. These can continue for years. (See box below for fuller list of commons symptoms).

IBS affects both men and women - though women suffer a higher incidence of irritable bowel syndrome which can result in particularly painful periods. Research indicates it is also fairly widespread among children.

This webpage is also relevant to those diagnosed with Chronic Functional Abdominal Pain (CFAP) which is a recurrent abdominal pain without evident physical cause, which can be regarded as similar to IBS but without bowel dysfunctions such as constipation or diarrhoea.

CFAP is thought to be due to hyperactivity in the nervous system and in common with IBS, has been shown to respond to gut-directed hypnotherapy.

IBS can be indicated by different symptoms and be the result many different causes. Over recent years opinions have changed about whether it should be divided into two, three or even four categories.

That though does not much help those suffering from the condition so it is probably better to regard IBS not a disease but a functional disorder caused by the bowel failing to work as it should.

Or to put it another way, it is the result of problems with the way in which a patient’s digestive system, brain and autonomic nervous system work or interact together.

IBS is not regarded as life-threatening and sometimes the problems are relatively mild, prompting some patients to insist they "don't want to bother the doctor,"

However it is very important anyone experiencing such symptoms should consults their GP, not least because other, more serious ailments, can produce similar indications.

Patients diagnosed as suffering from IBS are usually advised to change their eating habits and sometimes a different diet, particularly cutting out spicy foods, can prove to be the solution. But often it is not.  More is needed … and that does not necessarily mean trying out a range of over-the-counter remedies.

For more than 20 years a series of studies, conducted in several countries, have shown that gut-directed hypnotherapy can offer significant and sustained improvements for IBS patients. Success rates are reported as high as 80 to 95 per cent.

Gut directed hypnotherapy involves therapeutic methods, including visualisation, to calm patients’ internal and emotional responses while developing a greater sense of personal control. An important element is also the use of self-hypnosis techniques

Research in this area was pioneered by Dr Peter Whorwell, Professor of Medicine and Gastroenterology at Manchester University's Medical School and Director of the South Manchester Functional Bowel Service, who says:  "IBS is ideal for treatment with hypnosis, as there is no structural damage to the body.
During the hypnotherapy, sufferers learn how to influence and gain control of their gut function, and then over a number of sessions, learn to change the way the brain modulates the patient's gut activity.

Bill Doult is a therapist who has been specifically trained in gut directed hypnotherapy techniques to reduce stress and the sensitivity of the abdominal organs. He is a member of both the Register of Approved Gastrointestinal Psychotherapists and Hypnotherapists and the UK Register of IBS Therapists.

Another recent study was the trial conducted by Edinburgh University - published in the Journal of Clinical Nursing - showing hypnotherapy both reduced IBS symptoms and improved the quality patients’ lives.

The Edinburgh investigation was headed by Dr Graeme D Smith who explained: "There's no universal agreement about what causes IBS and traditional treatment is often disappointing. This study shows that hypnotherapy can effectively reduce symptoms and improve quality of life and underlines the valuable role that complementary therapies can play in modern healthcare.

If you have been diagnosed as suffering from either Irritable Bowel Syndrome (IBS) or Chronic Functional Abdominal Pain (CFAP) and would like more information about gut-directed hypnotherapy then contact the Therapy Partnership on 0118 988 3961. However the Therapy Partnership can only provide hypnotherapy for IBS to clients who, at some prior date, have had the condition diagnosed and confirmed by their doctor.